​Sir Roger Bannister, a sporting icon, passed away on March 3rd, 2018, at the age of 88. Roger Bannister shocked the world when he ran the first sub four-minute mile (3:59.4) at Oxford's Iffley Road track, on May 6, 1954. At that time, he was a medical student who trained less than an hour a day, generally during his lunch hour.

Many thought the sub-four-minute mile to be physically impossible and unattainable, not Bannister.

He acknowledged, "There was no logic in my mind that if you can run a mile in 4 minutes, 1 and 2/5ths, you can't run it in 3:59," he said. "I knew enough medicine and physiology to know it wasn't a physical barrier, but I think it had become a psychological barrier.
"While Bannister's achievement and inspiration will live on as one of the greatest in sporting history, less than six weeks later, Bannister's record fell. Why? The psychological feat was greater than the physical feat and Bannister shattered that barrier. Bannister broke open the door for many to follow. To date, approximately 1,500 people have run a sub four-minute mile since Bannister's record. The fastest mile time recorded was in 1999, by Morocco's Hicham El Guerrouj at 3:43.13, 16 seconds better than Bannister's historic time, while multiple people have now run over 100 sub-four minute miles.​​ 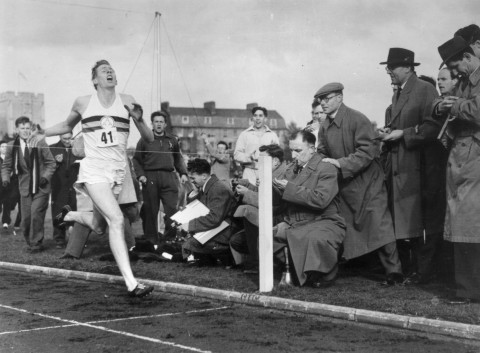 Roger Bannister, the first person to run a mile in less than 4 minutes.

Bannister simply did not adhere to common thought, but put his mind to it, set his goal and accomplished greatness on and off the track. He became Sports Illustrated's first Sportsman of the Year in 1954, he had a distinguished, forty year career in neurology, he served as chairman of Britain's Sports Council from 1971 to 1974, where he developed the first test for anabolic steroids and in 1975, he was knighted for his work in medicine and served as master of Oxford's Pembroke College from 1985-93.

We all have goals and dreams. There will always be others who will say those goals are impossible. These could be career goals, sales goals, new ventures in your business, and goals in our personal lives. Borrowing from Bannister's remarkable achievements, we learn that one must believe that their goals are achievable, no matter what common belief may be, and making time to work towards the goal is equally important. Bannister had a demanding schedule as a medical student, but he made time (as minimal time as it was) and stayed focused, using that time to the maximum. Bannister said on his training while a student, "I didn't have time to do more. But it was all about quality, not quantity – so I didn't waste time jogging, ever".

We all have demanding schedules, instead of finding excuses, find answers. We can all use time more effectively. Quality, not Quantity. We can break down our psychological barriers to begin achieving our own goals and dreams. Focus, determination and belief helped Sir Roger Bannister achieve the perceived impossible, with the right mindset, what are we each capable of achieving?

"However ordinary each of us may seem, we are all in some way special, and can do things that are extraordinary, perhaps until then…even thought impossible." – Roger Bannister

Take Bannister's lead and achieve your goals, leave your comfort level and work towards something extraordinary.

Protect Your Client’s Most Valuable Asset

Make the most of your AEP

If you want to sell more annuities, stop selling annuities!

How to Diffuse the Surrender Charge Objection in Annuity Sales