Everyone loves donuts! No one likes to explain the "donut hole".

The "donut hole" refers to the gap in prescription drug coverage under Medicare Part D. Every year, the costs and limitations change. No client is the same and some may fall into the gap, while some may not come anywhere near it. In today's blog post, I've answered the most common questions about an unpopular part of the prescription drug program.

​​​Most Medicare Part D Prescription Drug Plans have a coverage gap, sometimes called the Medicare "donut hole." This means that after you and your Medicare drug plan have spent a certain amount of money for covered prescription drugs, you will then be responsible for an increased amount, up to a certain out-of-pocket limit. The yearly deductible, co-insurance, or co-payments, and what you pay while in the coverage gap, all count toward this out-of-pocket limit. The limit doesn't include the drug plan's premium. 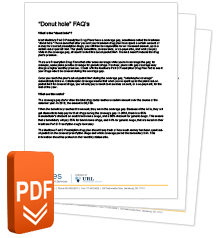 The coverage gap starts when the total drug costs reach a set amount over the course of the calendar year. In 2018, the amount is $3,750.

When the beneficiary reaches this amount, they are in the coverage gap. Because of the ACA, they will get discounts to help pay for their drugs during the coverage gap. In 2018, there is a 65% manufacturer's discount on most brand-name drugs, and a 56% discount for generic drugs. This means that a beneficiary will pay 35% for brand-name drugs, and 44% for generic drugs, that are listed on their Medicare Part D Prescription drug's formulary.

The Medicare Part D Prescription drug plan should keep track of how much money has been spent out-of-pocket on the covered prescription drugs and which coverage period the beneficiary is in. This information should be printed on their monthly statements.

​What are the stages? 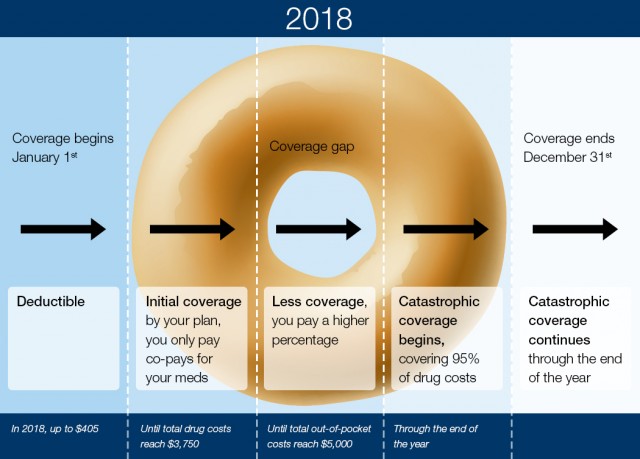 What counts towards the out-of-pocket spending limit?

What does not count towards the limit?

What if my client receives assistance?

People who get Medicare Extra Help to pay drug costs won't have a coverage gap and will pay a small or no co-payment once they reach catastrophic coverage. Extra Help is a special part of Medicare prescription drug coverage that gives more assistance to people with limited incomes than the regular program does.

How can my client avoid the "donut hole"?

How Annuities Can Help Your Medicare Clients

The Scoop on the Scope of Appointment

The Keys to Compliance with Secret Shoppers

How to Diffuse the Surrender Charge Objection in Annuity Sales

10 reasons why you should sell Medicare Advantage Plans